Sellers struggling to get asking price for their properties

The latest FNB Property Barometer revealed that sellers across the board are struggling to get asking price on their properties. A massive 98% of sellers have to reduce their initial price to obtain a sale on their properties currently on the market. 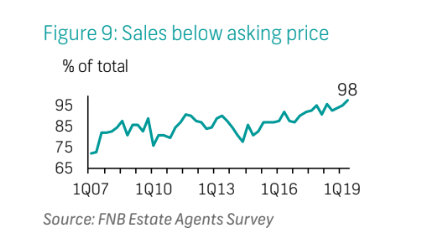 Furthermore, the average price drop edged up moderately to 9.9%, above the historical average of approximately 9.0% since 2010, all consistent with a market in favour of buyers. The Estate Agent’s Survey also revealed that the average estimate for “serious viewers per show house prior to sale” was 9.4 viewers per show house in the second quarter of the year, slightly down from 10 in the prior quarter suggesting that buyer enthusiasm is still relatively slack.

On a positive note, days spent on the market did improve slightly to 14 weeks and 1 day, from 15 weeks in the fourth quarter of 2018, possibly as buyers rush to take advantage of bargains. This is significantly lower than the most recent peak of 17 weeks and 6 days in the third quarter of 2018 and edging closer to the long-term average of 13 weeks and 4 days (since the inception of the survey question in 2004).

The survey also revealed that the most prevalent reason for selling a property in South Africa is “Downscaling because of life stage” which accounts for 23% of all sales in the second quarter of 2019, the same as in the previous quarter. Concerningly, “Downscaling due to financial pressure” has become increasingly prominent in the past year; the estimated proportion of such sales jumped to 19% in the second quarter from 16% in the first.

According to Siphamandla Mkhwanazi, FNB Economist this is in line with their view that household finances are under pressure. Mkhwanazi also states that 60% of those that sell due to financial pressure now opt for rental properties but that this has not benefited the rental market as of yet, as flat vacancies have continued rising and rental inflation is still muted.

Emigration-driven sales have become a more prominent feature of the housing market in South Africa over the past two years. According to estate agents, these are estimated to have steadied at around 13.4% in the second quarter of the year, marginally down from 14.2% in the first. This trend is more prevalent in the higher end of the market, although appears to have spilled over to the lower ends as well. The spike in the lower and middle ends could, in part, be explained by upper-income owners disposing of their investment properties.

The North Coast of KwaZulu Natal is proving itself as the new property capital of South Africa has data reveals that it is outperforming “affluent areas.” In the Johannesburg region, Soweto remains the best performing area although average house price growth has slowed noticeably over the past 12 months, coming down from a peak of 14.3% y/y in Q1 of 2018 to 4.7% y/y in Q1 in 2019. 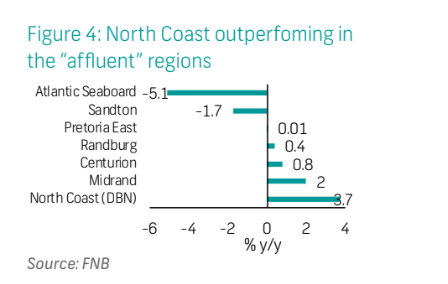 In the Tshwane region, the more affluent areas of Pretoria East and Centurion are experiencing lowering of house price growth. In contrast, the contrast, the Northern sub-regions, primarily comprised of middle and low-income areas, are trending upwards. Akasia, which primarily offers middle-priced housing alternatives, jumped to 6.9% y/y in the first quarter of the year, from 5.5% y/y in the last quarter in 2018. This marks the third consecutive quarter of accelerating prices in the region. Moving further down the price range, the Mabopane/Soshanguve sub-regions remain buoyant and accelerated to 10.6% y/y in Q1 of 2019 from 10.1% y/y in Q4 of 2018.

The eThekwini Sub-Regional House Price Indices showed the city to be performing better than all major metros in South Africa, with average house price growth of 5% in 1Q19. Areas in the northern parts of the city, closer to the airport, are doing particularly well. Excluding low-income areas, the North Coast Inland region, which includes areas such as Tongaat and Redcliffe, has registered the highest cumulative five-year growth in the metro, at 41% versus the metro average of 31%. Growth in the sub-region has been supported by new developments in the area.

Mkhwanazi says they expect an interest rate cut at the next MPC meeting later this month which will aid in the improvement of market sentiment. This should see buyers take advantage of attractive prices, particularly in the higher price ends. Nevertheless, sustainable growth in purchasing activity hinges on the broader economic developments, particularly the labour market.

For the full report visit our Property Index page

economy property market buyers sellers finance
Loading comments
More Market & Opinion articles
Market & Opinion
How to make the most of a home office
The trend towards working from home and at home is expected to gain massive ground in the wake of the Covid19 crisis and will make the “home office” a feature of many more homes big and small, says Gerhard Kotzé, MD of the RealNet estate agency group.
read more
Market & Opinion
Ongoing development in the popular Southern Suburbs Uppers
Burgeoning demand for residential property in the Southern Suburbs in recent years has spurred densification in the most sought-after areas like Claremont and Kenilworth Upper, where compact upmarket gated developments are becoming an increasingly common feature on the property landscape.
read more
share this property article
Bond Calculator
Calculate the estimated repayments on a home loan and savings with extra payments
Cape Town
Cape Town is home to one of the most cosmopolitan communities in the world and certainly lives up to its title as the Mother City. From its beginnings as the port for the Dutch fleets, Cape Town has evolved into one of the most modern cities in South Africa and the African continent.
read more
Akasia
Built on former agricultural holdings, Akasia still retains features of the once rural area with large family homes and it is still surrounded by large semi-rural tracts of land.
read more
Centurion
The first thing you will notice about Centurion is that despite its ever-expanding urban landscape, there is a sense of community that many large cities lack. It is world class conveniences woven into a small town fabric to create one of Gauteng’s most vibrant up-and-coming areas. This is a family orientated area that caters for young professionals in the newer extensions, as well as retirees in the older suburbs of Centurion.
read more